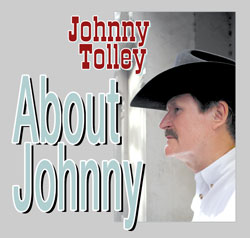 "Working with a legend taught me how to entertain," says traditional country singer, Johnny Tolley. That legend was country comedian Jerry Clower. "I traveled with Jerry for many years, applying my trade," remarks this Tennessee born and Arkansas-raised entertainer.

While growing up in Blytheville, Arkansas, no one in Johnny's family sang or played music. His childhood musical influences came from the clear channel station WLS Radio in Chicago. At the age of 10 Johnny heard all the country music greats and began singing along with the radio. In high school, he became a rock and roll singer in a local band. But singing wasn't in his future, but college was. Coming from a long line of teachers, he was destined to be one. After graduating from Arkansas State with a degree in education, Johnny was sidetracked from his chosen career. He was invited to sing at a church banquet where he met an owner of several Holiday Inns. The owner hired him to sing at his Holiday Inns; thus began his music career.

As Johnny's popularity increased, he was introduced to Jerry Clower, and the comedian realized Johnny would be a "perfect fit" for his shows as an opener. Johnny agreed, and this package show became a ten-year-long gig. He also has opened shows for Tom T. Hall, Jerry Reed, George Jones, and George Strait.

Johnny sings traditional country music with modern arrangements supporting a voice influenced by folk music (James Taylor) and a balladeer (Marty Robbins), but a voice completely molded into his own style. With the success of his "I'm Countryfied" single from his second album, Johnny taped his first country music television show pilot, "Countryfied," directed by legendary director Joe Hostettler and produced by Michael Allen. Johnny's guest star on the show was famed country singer, David Ball ("Thinking Problem"). This pilot show is currently being pitched to the major television outlets.

While working as single act at the world famous Loveless Cafe in Nashville, a gentleman asked Johnny to join him at his table. He declared, "I love your style. Your delivery is very unique, and I enjoyed listening to you." These compliments were given by well-known actor Gene Hackman.

It's been a long dry spell for traditional country music, and it's over now with Johnny Tolley's long-awaited fourth album, Last Call. It's in the marketplace in digital and CD formats.

The latest single from the album, "I Go to Pieces" – a song that was a super international hit in 1965 by British Rock duo: Peter and Gordon. This single is a slow haunting melody with lyrics about a lost love that will grab your audience's attention. Johnny Tolley's smooth traditional country vocal proves to be the best interpreter of this song written by the legendary Del Shannon, a member of the Rock and Roll Hall of Fame. This version of the classic is definitely a country song – destined to be a country classic.

Whether working with his band or solo, Johnny is always comfortable on stage, and his audience is comfortable with him. When you witness Johnny's performances, you will notice he learned his trade well. Working with a legend has paid many benefits for his audiences. You will be entertained.